Outdoor Advertising
As A Social Channel 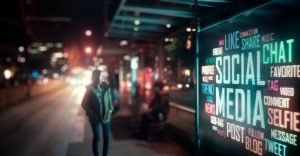 Outdoor advertising may be seen by some as a totally separate world to digital advertising but this is not the case as it has become a social channel.

Digital advertising has grown exponentially over the last decade causing a shift in attention and budget allocation from outdoor advertising. It however soon became clear that consumers’ attention isn’t focused on one form of advertising.

Marketing Is Entering A New Era

Social media has taken advertising by storm and everybody wants a piece of the cake. Advertising has evolved so much over the past decades and the Internet opened new frontiers for advertising.

Social media ensures that people spend a huge amount of their time online. Advertising on social media also has its challenges. This includes:

Marketers get unique insights on how to reach consumers if they know were consumers are going, what they pay attention to, what they need, and where they shop.

Billboards have become more eye-catching seeing that people spend so much time in front of screens and have become pros in ignoring or blocking pop-up ads and banners. Outdoor advertising can, however, be greatly amplified when consumers share ads on social media.

A photo of an eye-catching billboard on social media can travel the globe in an instant. Marketers are in the position to effectively create advertising campaigns that complements itself across different platforms.

If an advertisement is creative and eye-catching enough consumers will amplify the product or service on behalf of advertisers. Research has shown that consumers are posting photos of interesting outdoor advertisements on social media platforms such as Instagram which leads to a specific advertisement being seen by three times as many people.

Seeing that the use of social media occurs primarily on mobile devices consumers always have their devices on the ready when they are out and about. This means that campaigns that can integrate both can influence the impact of both mediums.