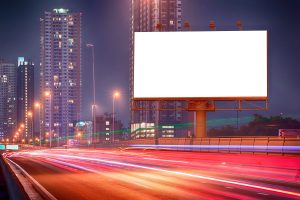 We are all used to seeing billboards. In previous years these consisted of large frames placed in very visible places and plastered over with an image made of paper. Later vinyl images took over because they were weatherproof and long-lasting, and did not fade as easily in the sun and rain. New billboard technology such as the digitation of billboards has grown in popularity, and many clients are asking themselves whether it is still worth-while investing in static (paper/vinyl based advertising). While digital billboards seem to be taking over the market, there is something to be said for the plain old static billboards.

The fact is that technology is not developing quite as fast as we imagine when it comes to billboards. Even with the latest technology (digital and PoV) placed in many different locations, the traditional billboard still remains one of the most trustworthy forms of outdoor advertising. One of the advantages that a traditional, static billboard can provide you with is that only your message can be displayed on it for however long it takes. Digital billboards are by all means highly effective, but often clients share these billboards to broadcast different advertising campaigns. This means that even though these messages are highly targeted, they still have a short visible lifespan.

Traditional billboards with their vinyl covers may seem old school now, but the billboard manufacturers have become increasingly aware of how to optimise the value of these billboards. This means that proven advertising strategies using billboards are still highly effective and that today’s experts are able to provide you with the best billboard strategies and locations possible.

The most important question here is to what extent traditional billboard strategies and presence can still gain value for money and provide a high return on investment. To date, there is no real difference between static billboards and digital billboards. At the end of the day, your message still gets displayed in all the relevant sites, and only your message. This ensures that the message is not diluted and that your brand or business is displayed on a permanent basis wherever it is placed.

There is definitely an argument for new digital technology, but when it comes to billboards it still remains to be seen how much value for money they really provide. Time will tell.