Billboards and
The Future 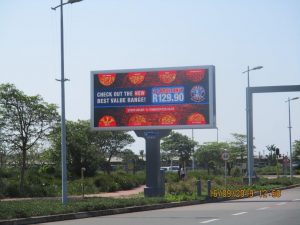 Over time there have been many theories about what makes people tick in order to discover what makes them choose one product over another. Advertising has a lot to do with this – while some advertisements hit exactly the right note with a target audience, another will be a dismal failure. The trick is to get to know your target market, their needs, their lifestyles, tastes and trends, and in modern times this is easier to track than before. It is now possible to do data analysis by gathering information on consumer behaviours on social media and online shops, and this provides very clear indications on how advertisement and marketing should be formulated in order to appeal to a much narrower demographic on a more intensive level.

When it comes to billboards, it does help to analyse online media, but it can be tricky to apply the correct measures to billboard advertising strategies. Most billboards in South Africa still consist of the old-school static billboards that use a shotgun impact to get noticed and to drive sales. Two things are crucial here: (1) the message on the billboard, and (2) the location of the billboard. If a broad demographic is to be targeted, billboards are hugely capable of conveying a more general message (such as most fast-food chains with recognisable logos – these will appeal to anyone who is hungry). For smaller demographics, however, the billboard must be in the correct place and send out a very specific message to that group of people to yield results (for instance, a young clothing line for students can be positioned near a campus).

Digital billboards yield great results because they can convey a story more effectively than a static billboard. They are also very noticeable and provide entertainment in a variety of frames. This can be very useful at places where the desired demographic usually spend time – such as at a bus stop or a busy intersection where vehicles must stop and wait during a daily commute. Digital billboards can show mini-movies that entice people to try the product and can be used very effectively to tell a story using a series of stories.

Modern smart billboards take it a step further. Recognition software can now be used to target drivers of specific vehicles – the recognition software identifies the type of vehicle and an advertisement is then activated to target that driver. Digital billboards can also measure traffic density and speed, and slow images down or speed them up depending on how much screen time a driver gets. In a world where driverless vehicles are becoming a reality, billboards have the potential to play an invaluable role, providing drivers or passengers with entertainment while passing. Impulse purchases can be made on a smartphone or another online gadget in the vehicle. The most important question here is how people will behave in driverless vehicles. Will they take the time to see outside the windows or will they be engrossed in their smartphones? Only time will tell, but it goes without saying that technology will be developed where billboards still get noticed and remain effective despite the changes in human behaviour.