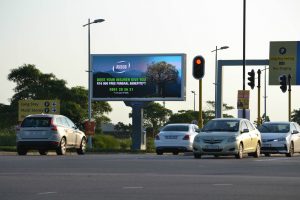 We have all grown up with billboards and they have become a part of life for most of us, so you probably already know quite a lot about them, such as how important location is, how cost effective billboards are, and how billboard design can affect its effectiveness. But did you know that the first billboard was used 3,000 years ago? This was when an obelisk was set up in Cairo to advertise an award for a runaway slave. Soon the Egyptians realised how effective these obelisks were at distributing information, and they began posting laws and notices to the public in obelisk (or billboard) form!

Here are some other fun things you may not know about billboards:

1. Electric billboards have been around for a century.

We tend to think of electric billboards as relevantly modern inventions. But in 1904, the owners of Trimble Whiskey increased the visibility of their billboard by lighting it up at night. Since then, electrically lit billboards have become the order of the day, and technology has now developed to the point where we use electronic billboards.

2. The largest billboard in the world can be found in Spain.

3. Some billboards can be seen from space.

The glow of the billboards in central New York, and in particular around Times Square, can be seen on photographs taken from space during a space mission in 2013. It is even possible to identify Central Park as the dark rectangle in the middle of all the lit-up billboards.

4. Billboards can now be scented.

If you are walking somewhere and pass a billboard that smells like freshly ground coffee or a burger, you are more likely to develop a need for a cup of coffee or to order some food. In 2010, a store in North Carolina built a billboard that wafted the smell of grilled steak! It is quite expensive to manage though, but ‘smellvertising’ billboards are still being developed.

5. The most expensive billboard costs two and a half million dollars.

As expected, it is in New York where Google paid this massive amount to rent this well-located billboard. It is so costly because of the location and traffic – around 9 million people will see this billboard every month!