How Effective
Are Billboards? 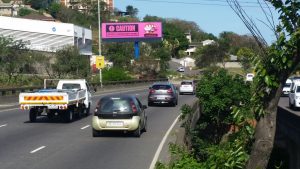 Most marketing managers or business owners often wonder whether billboards actually work. Because there are now so many different, modern ways to advertise, including social media, there is a whole myriad of advertising media to utilise, and because billboards have been around for more than a century, some people may view it as a rather antiquated way to advertise. They may even question the effectiveness of billboards as a result.

The answer is easy. While billboards have been around for centuries and are still used very widely, it proves that it is an advertising medium that has retained its usefulness and effectiveness. They do produce a good return on marketing investment because, compared to television or radio, they are inexpensive, yet they attract a very wide audience.

The average person spends close to twenty hours per week in some form of transport, and some a lot more. Whether they are driving their own vehicles or commuting via public transport or taxi, they are on the road, and keen to enjoy the landscapes around them. They do listen to the radio and this provides great advertising opportunities, but radio advertising at peak times is very pricey. One of the most cost-effective ways to take advantage of the time that people spend travelling is the use of billboards and some other forms of outdoor advertising. There is a captive audience just waiting to be thrilled or entertained by your billboard advertisement, and you can leverage this with great results.

The placement of billboards is of importance and can have a great impact on the return on the investment. The design is also a critical factor that can impact ROI. Different locations will call for different designs; for instance, a billboard next to a highway with a lot of traffic will have to make an impact within 1 – 4 seconds, and a billboard at a busy intersection or bottlenecks where traffic routinely come to a standstill typically has more time to make an impact while vehicles are stationary. The design has to be adjusted accordingly to get the right results. Where traffic is slow, more information can be provided, where traffic flashes past, less is more. Impulse buying decisions can also be influenced by billboards. For instance, indicate the presence of a shop or restaurant further along the highway, and people may suddenly remember that they need to pick up some groceries or get something to eat on the way.

Getting the billboard noticed is great, but it only forms part of the strategy. You need to ensure that your advertisement is memorable once it was observed and that people take action accordingly by investing in your brand. It then goes without saying that yes, billboards are still one of the most cost-effective and effective ways to appeal to a large audience!