The Pros of Using
Billboards for Advertising 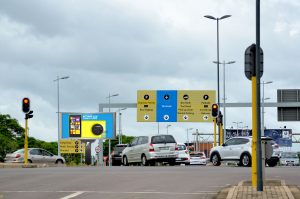 Most people who have journeyed on a long road from one location to another have at some stage been stirred into action by a billboard announcing a rest stop, restaurant, or gas station. For instance, a billboard that displays a delicious-looking burger and an ice-cold drink and says, “Turn right at the net exit to bag Bobby’s Burger!” immediately calls to the person who needs to break the monotony of the drive or one who likes the look of the burger. In cities, these types of billboards are commonly spaced closer together to indicate the presence of a business or establishment. More billboards are located in places where traffic moves slowly, such as bottlenecks, traffic junctions and airport turnoffs. This provides the driver and passengers to peruse the message streamed to them via the billboard. If advertising media could be seen as a family, the billboard is the energetic uncle that does not visit very often, but when he does, he immediately captures the attention of everyone in the room. This makes him stand out, and because he stands out, he becomes memorable. Such is the power of the billboard.

Other pros you can expect when using billboard for your advertising campaign include the following:

There are many other reasons why businesses choose billboards and outdoor advertising to market their brands. For more information speak to our experienced team at Face First Media!